A Boutique Hotel’s Façade Goes Up in 13 Days 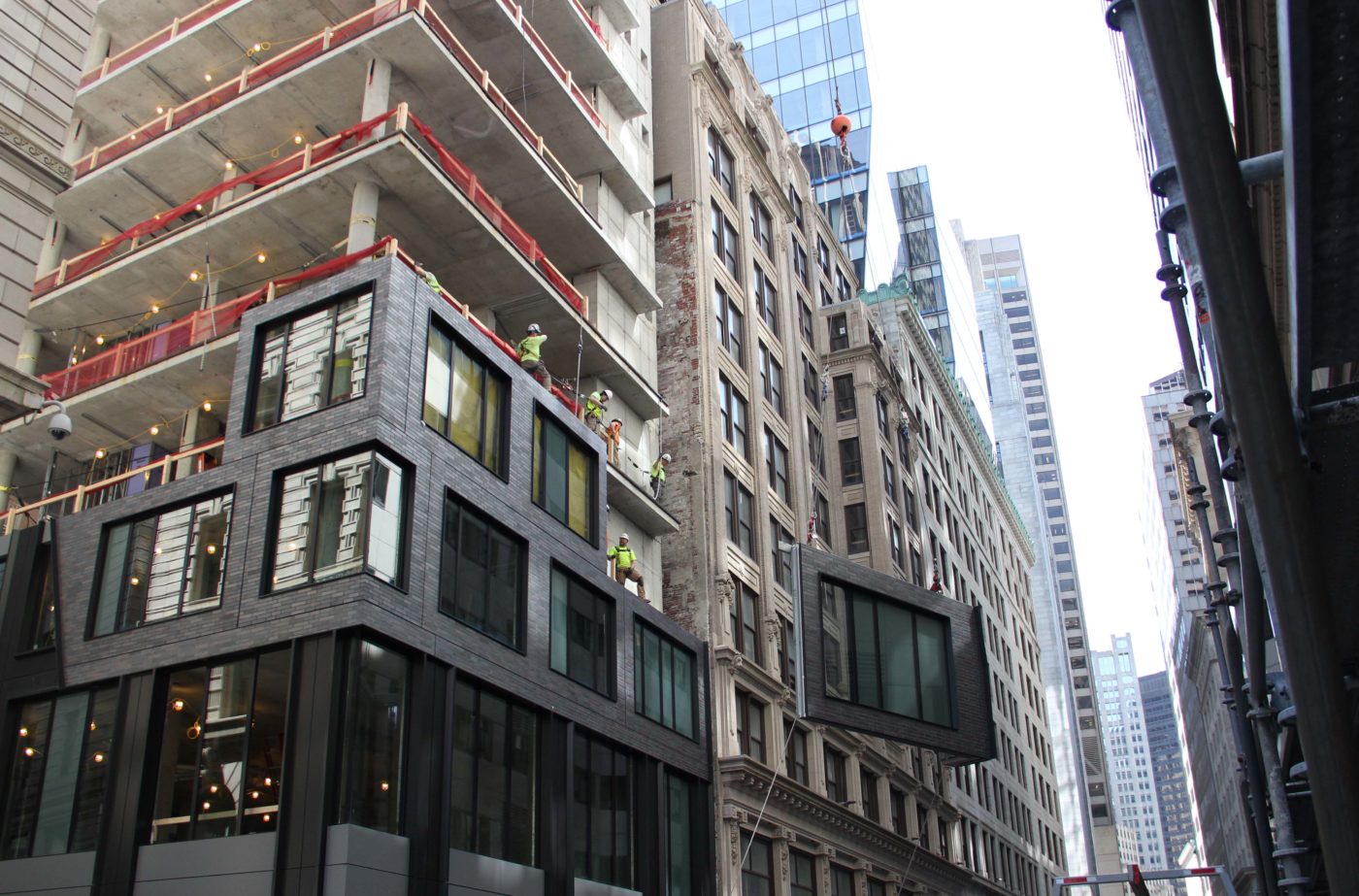 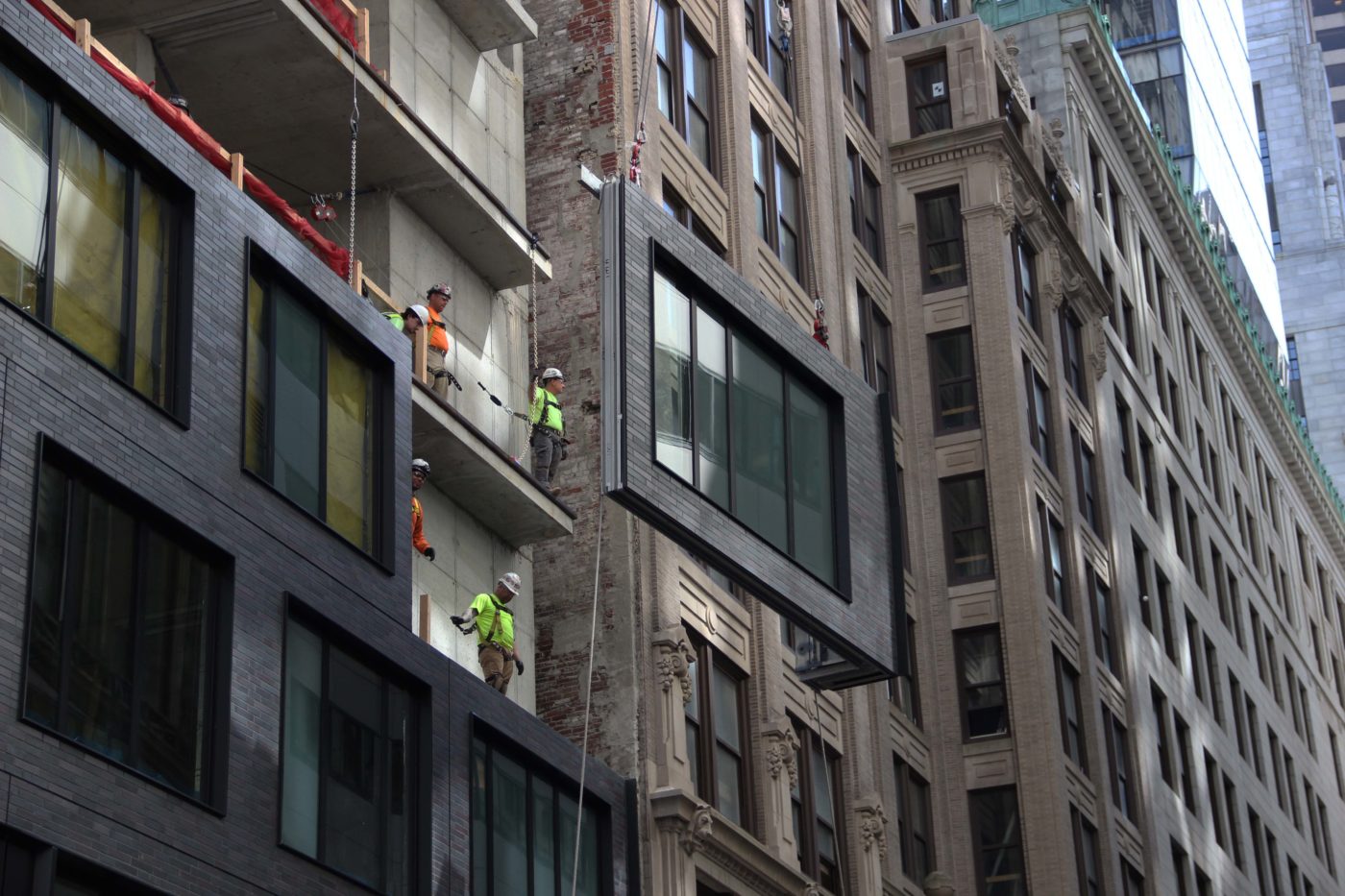 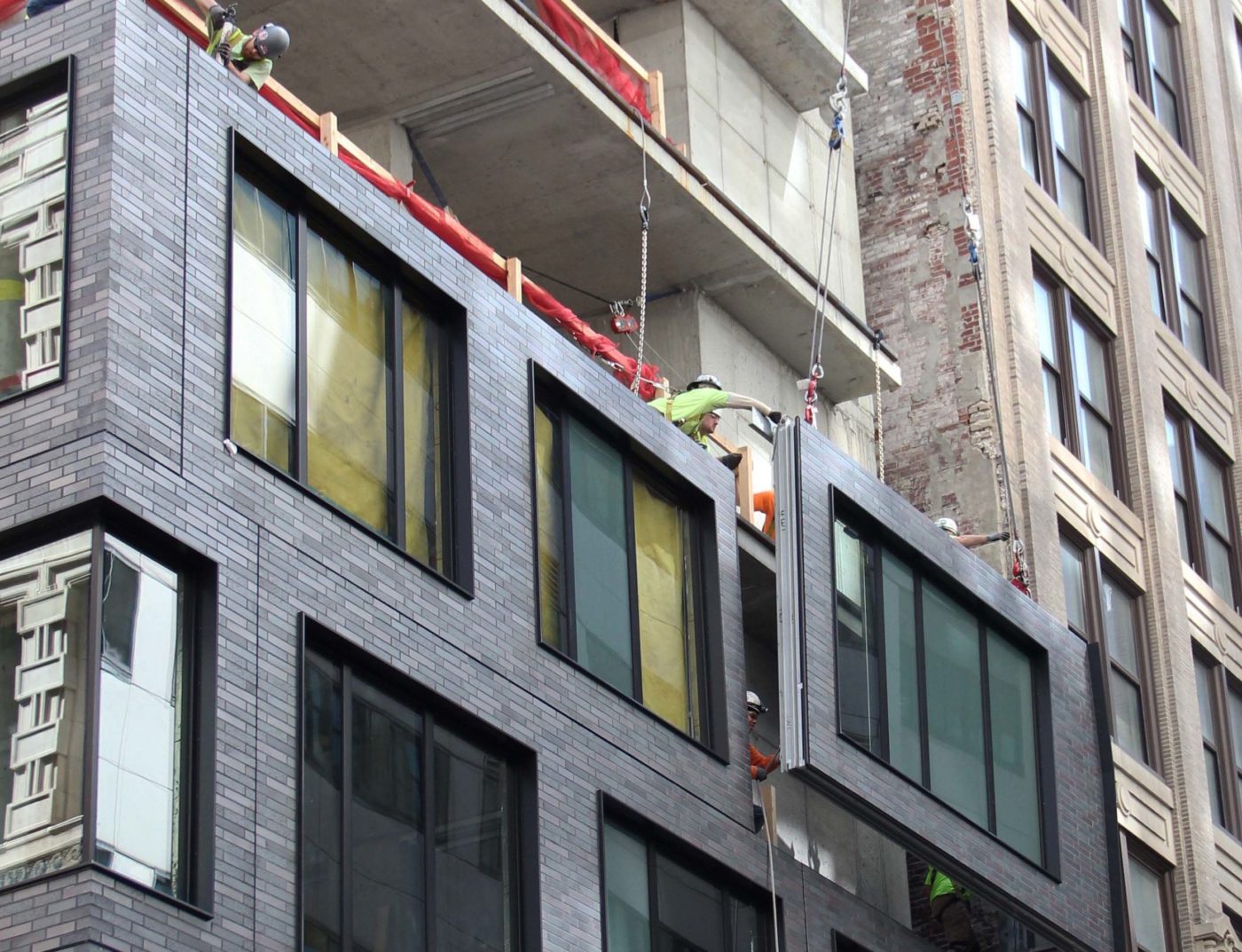 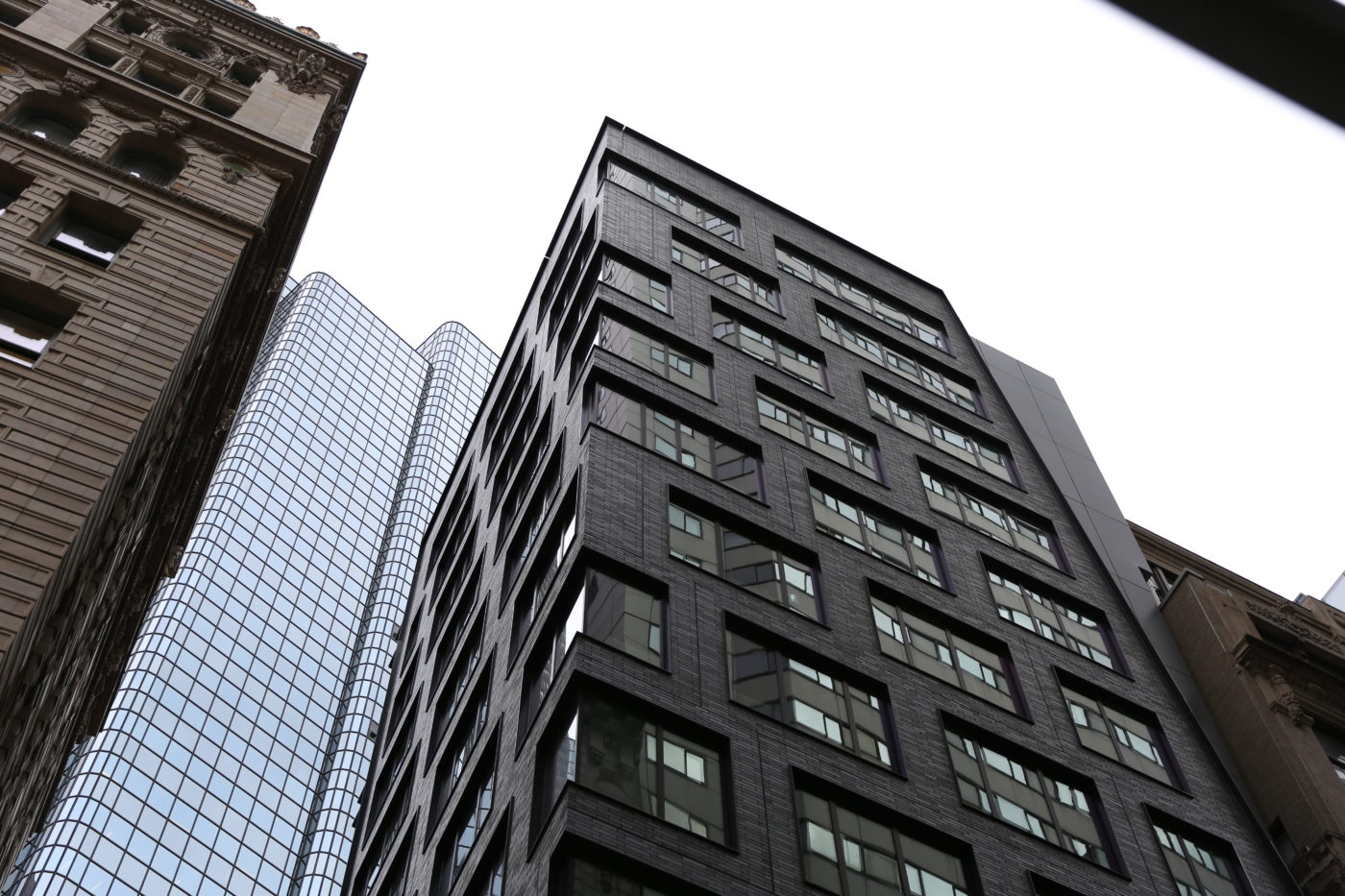 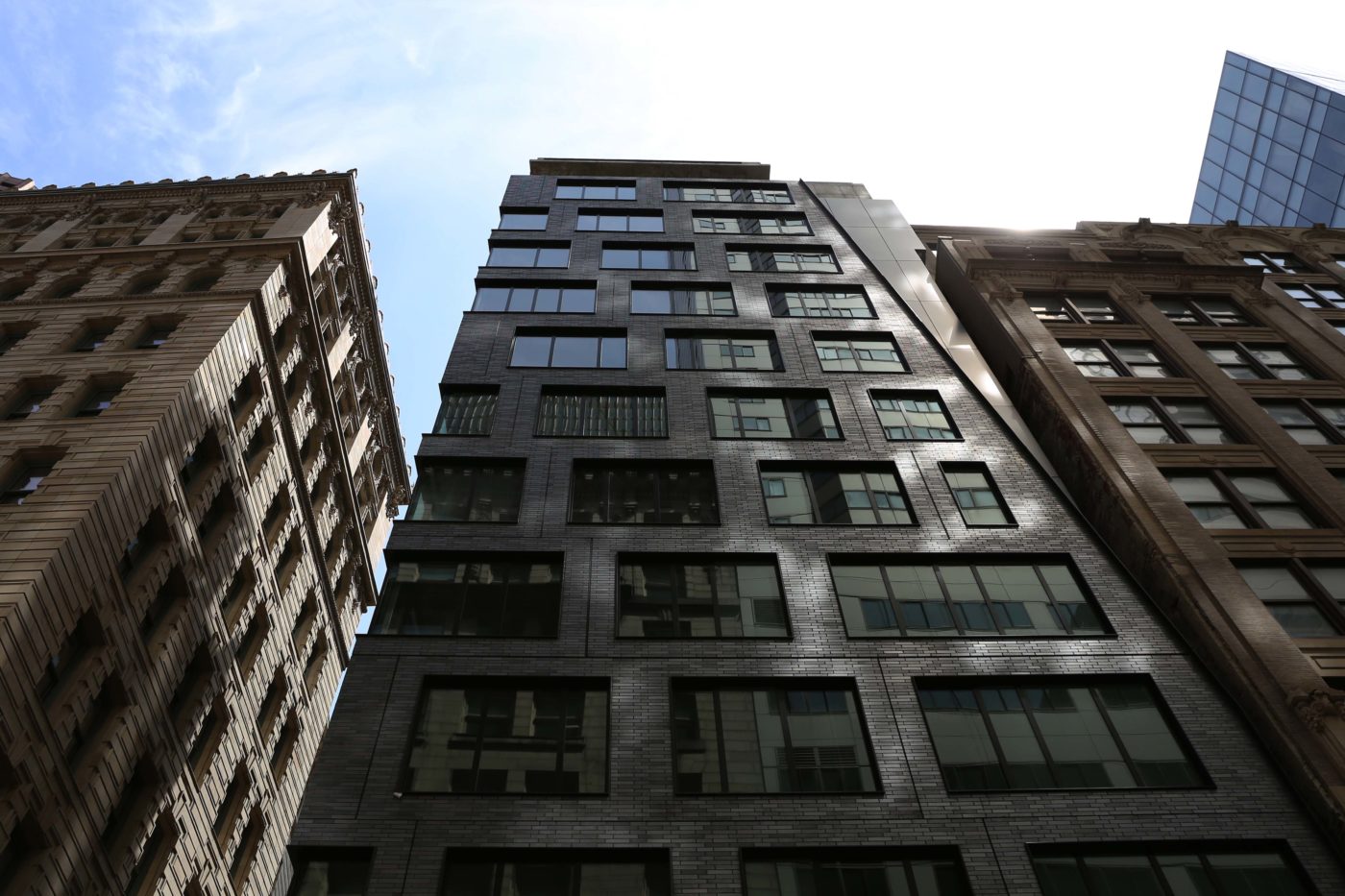 If you took a vacation in May and noticed what looks like a new building downtown when you returned, here’s a brief version of the story. A 163-room boutique style hotel, combining contemporary materials with historic details, got a new face. With one third of the building being an addition, the new façade became critical in creating an identity for the new hotel and restaurant, while at the same time blending with the existing historic building on Devonshire Street. This tight urban site required efficiency in procurement and installation, requiring collaboration between owner, design team and contractor.

Arrowstreet recommended a Design-Built collaboration with Island Exterior Fabricators (IEF). An early understanding of the basic IEF assembly allowed the design team to keep the façade on budget, while maximizing options for a unique, project specific solution. It is challenging to overcome the flat look that thin brick often creates on a façade. Arrowstreet worked with IEF’s proprietary panel system to create depth in the metal panning around windows and at material changes on the façade. The design uses three different ironspot brick finishes, creating variation and texture through the brick field on the façade. The prefabricated panel joints are staggered, contributing to the playful twist of the windows up the building. The hotel units inside did not require adjustment, as spandrel glass in the windows allows partition walls to stack for a traditional, efficient layout with stacked plumbing.

Ninety two façade panels were pre-fabricated in Calverton, New York, simultaneous to the concrete structure being built on site. Arrowstreet visited IEF’s shop in Long Island three times throughout construction of the panels. Fabricators working in a temperature controlled environment install each element with precision, and panels go through an extensive quality control review at various stages. This process ensures each panel meets aesthetic as well as performance expectations. The panels are sized to match the exact dimensions of IEF’s trucks to ensure efficient delivery and installation.

Despite the cold, snowy New England winter, façade panel production did now slow down and the façade was ready for installation just days after the concrete structure topped off. Having the facade of the new 12-story tower constructed off-site as a prefab system, allowed us to achieve a greater level of detail and design quality than is typical for this type of construction. Less than three weeks after the first panel arrived on site, the entire panelized façade was complete.