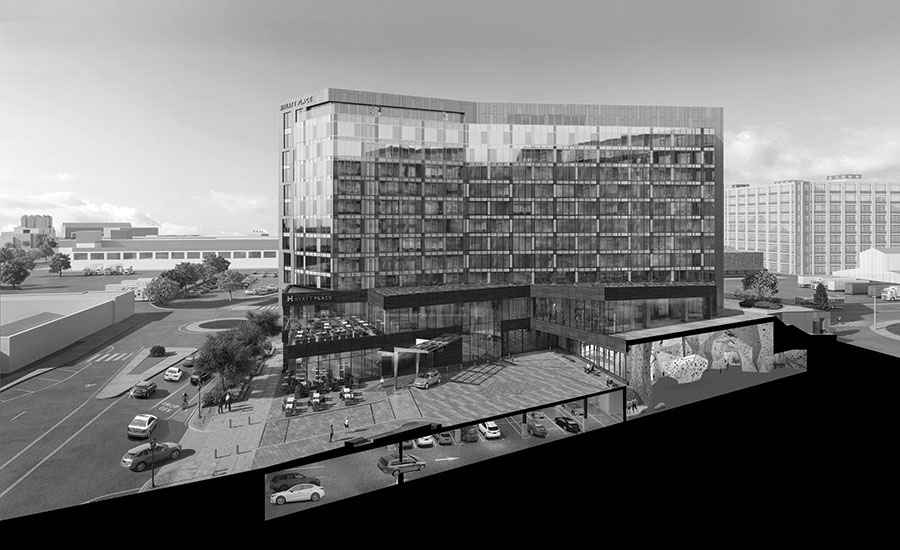 The way people get around is undergoing a revolution—three revolutions, in fact: electrification, automation, and shared mobility. One of the far-reaching implications of this coming change is that a staid, stolid, and largely unloved building type, the multilevel parking garage, will require a radical rethink.

By 2040, more than half of the miles traveled in the U.S. could occur in shared autonomous vehicles (AVs), which would rarely need to park, according to a 2016 study by Deloitte, a financial and risk-management consultant. Dense urban areas in particular—likely to be well served by public transit, AV fleets, ride-sharing, and other transportation options—can expect to see demand for parking plummet while the need for new kinds of spaces, such as pickup and drop-off zones, electric vehicle (EV) charging stations, and AV hubs, emerges. The question for architects, says Amy Korte, a principal with Boston-based Arrowstreet, “is how quickly can we, as design professionals, run through the possible scenarios to help cities and municipalities plan for them?”

Prominent among these scenarios is the potential blight of surplus parking structures. “The prediction that garages aren’t going to exist anymore isn’t quite accurate,” says Korte. Some may transform into docking hubs where AVs can be charged, cleaned, and serviced. City planners typically advocate for locating these stations on the outskirts of the city. However, Korte says entrepreneurs exploring the business model want such garages located centrally. That way, travel time while empty is minimized, and the vehicles are able to return more quickly for servicing.

For garages that don’t find new life as transport hubs, the municipalities that are often the owners of these hulking, low-ceilinged, slope-floored structures may be hard-pressed to know what to do with them. Peckham Levels, a multistory, split-level, early 1980s garage located in a bustling area in southeast London, offers one promising example.

Winner of a 2018 New London Award for best “meanwhile” project (one intended for interim use, in this case 15 years, pending development of a long-term plan), “Peckham Levels has taken a disused carpark that, for decades, was a site of antisocial behavior and made it a popular town-center venue,” says Paul O’Brien, an associate at London-based Carl Turner Architects (CTA), designers of the project.

The transformation of 95,000 square feet of the garage’s midlevels (the upper levels are leased seasonally as a bar and patio, while the ground floor is a multiscreen cinema), completed in 2017, provides the neighborhood with much-needed community space and affordable workplaces. Public program elements include a play area, event and gallery space, food and drink outlets, and a yoga studio and hair salon, while the workspaces include various sizes of customizable shells, with shared service areas, that have enabled local artists, makers, and entrepreneurs to create their own jobs.

The design brings a light touch to the conversion. “There was no point trying to cover everything up and make it feel as though you weren’t in a carpark anymore,” says O’Brien. “That was the charm of it.” The approach also suited the budget, about $42 per square foot. Major interventions are limited to enclosing the open-sided building, with new windows and insulation, and installing mechanical, electrical, and plumbing systems. Concrete structure and services are exposed overhead. Parking spaces are still marked on the floors. Partitions of oriented strand board on wood studs separate the perimeter workspaces, and translucent polycarbonate panels admit daylight to the former drive aisles, which are now corridors.

The main difficulty of converting the garage revolved around the low ceiling height (7½ feet to the underside of beams) and floors sloped to drain. Locating partitions beneath beams, and running ducts parallel to them, makes the most of the limited height. In larger coworking spaces, plywood floors on leveling battens allow people to sit around a long table without their pens rolling away. But the big move was the choice of program. People on their feet, moving around, making things, are more likely to appreciate the rough-and-ready aesthetic and less likely to notice the slight floor incline, says O’Brien: “It would have been very difficult to bring it up to a comfortable standard for housing.”

The surprise challenge, however, was structural capacity. With such a hefty concrete structure, it would be easy to assume that it could support any load. But cars are full of air, so they’re not very heavy for their footprint, and, unlike crowds in a bar or music venue, they don’t dance. With advice from the project’s structural engineer, Eckersley O’Callaghan, CTA repositioned the program’s heavier loads to locations where adding carbon-fiber reinforcement to the underside of existing beams was straightforward. “If we were asked to design a carpark now,” says O’Brien, “we would ask the clients or the engineers whether we could potentially future-proof it in terms of loading and ceiling height.”

That’s exactly what two projects now in the works are doing—a freestanding public structure in Calgary, Canada, and a below-grade “parkade” that is part of a mixed-used development in Boston’s Seaport neighborhood.

Calgary has a reputation as a city with a strong car culture, says Johanna Hurme, principal at Winnipeg-based 5468796 architecture, designers, in collaboration with the local office of Kasian Architects, of the 9th Avenue Parkade. Even so, “the municipal parking authority came to us with the idea that this would be the last parkade they ever built,” says Hurme. “For them to say that perhaps car ownership and parking are not the future set the tone for the project.”

Located in the city’s East Village, where it will serve a new central library designed by Snøhetta as well as local businesses in the revitalizing neighborhood, the $40 million, metal- mesh-draped project comprises a mix of uses. The ground and second floors house a 55,000-square-foot innovation center, named Platform. Similarly to Peckham Levels, Platform will provide multipurpose spaces for makers, entrepreneurs, and community members. The upper five decks, which in the immediate term will provide 510 parking spaces, are designed to facilitate conversion in the longer term to residential or commercial uses.

Of the four most common garage floor types (ramping, split level, flat with helical ramps, flat with perimeter ramps), the flat-floor types are the most easily adaptable, yet their separate ramps constitute a distinct retrofit expense and take up valuable space. So the 9th Avenue Parkade’s floor type is a hybrid. The initial ramp from street level will be suspended from the structure for easy removal. For the upper levels, the site is large enough that a continuous slope of just 2 percent achieves the required floor-to-floor rise. Future uses on the shallow slope will be built in terraced segments.

Additional provisions for adaptability include a racetrack-shaped plan with a 40-foot-wide atrium bringing daylight to the narrow (40-foot) column-free floor plates to either side. The post-tensioned structure is sized to accommodate residential or light commercial uses in the future. And the parkade’s ceiling heights provide between 12½ and 14 feet clear. Hurme estimates that the building’s future-proofing measures represent a surcharge of about 10 percent in construction costs.

While it’s easy to imagine any number of possibilities for an aboveground structure such as the 9th Avenue Parkade, alternate uses for layer below layer of underground parking are tougher to come up with. In 2015, Parcel K, a 500,000-square-foot mixed-use project in Boston’s Seaport district, then in design development, had three levels of below-grade parking planned. Then Tesla achieved a self-driving milestone with its Autopilot software, and Uber hit a billion rides—and then 2 billion just six months later—and all that parking began to look like a dubious investment. So the project’s architect, Arrowstreet, came up with a more flexible solution.

Deleting two of the parking levels saved about $18 million in construction costs, reduced the construction schedule by an estimated six months, and eliminated future maintenance expenses on excess capacity. For the remaining level, the design provides for a parkingspace count that could range from 197 to 420, achieved with valet parking and a mix of stackers (devices that lift vehicles to enable more to be parked beneath), striped spaces (conventional spaces painted on the floor), and drive-aisle parking. For additional flexibility, the parking level’s floor-to-floor height was increased to 15 feet, 6 inches, and a scenario envisioned where a future double-height space could be created to allow new uses on the parking level that would engage with street level retail space on the floor above.

The Center Street Parking Garage, an eight-level, $40 million, net zero energy facility in Berkeley, California, replaces a smaller, seismically inadequate parking structure from the 1950s, and is expected to certify at Gold, Parksmart’s highest level. “The City of Berkeley understood that parking is crucial in making a viable downtown,” says Raju Nandwana, vice president at International Parking Design (IPD), the Oakland-based architect for the project, “but they also had the political will to put in the attributes and qualities that exemplify what parking could be.”

A dynamic facade, designed by local Marcy Wong Donn Logan Architects, contributes to the liveliness of the city’s arts district: folded and perforated metal panels form a fluid pattern on both exposures of the through-block building, and programmable colored lights add verve. Ground-level art-exhibit space, a café, and a curbside micropark animate the building’s street fronts. Care for the pedestrian experience of the garage shows in its open, safe, and inviting stairs, its clear graphics that support wayfinding, its public restrooms, and a state-of-the-art security system.

With 720 spaces, the new garage provides a 70 percent increase in capacity compared to the previous one, and increased functionality. A camera-based parking-count system directs drivers to available spaces, saving time, frustration, and gas. Fuel-efficient vehicles enjoy preferred parking, and electric-vehicle charging and tire-inflation stations are provided.

Beyond cars, the garage supports a range of mobility options that integrate it into a multimodal transportation network. Located less than a block from a commuter-rail station, the facility includes 350 bike spaces, a free bike valet, and a Bike Station (a secure bike parking facility for commuters, complete with a bicycle- equipment repair shop). The parkade also hosts car- and bike-share hubs for those with no need to own. And, by enabling a reduction in street parking, it even makes room for wider sidewalks.

The building takes its environmental responsibilities as seriously as its civic and operational ones. A 500-panel photovoltaic array on its rooftop enables the garage to meet all of its own power needs, and the structure is sized to support an expanded array in the future. Energy-efficient sensor-controlled lighting, low-VOC paints, recycling receptacles, water-conserving restroom fixtures, and rainwater catchment and filtration systems round out the project’s environmental credits. “This is an example of what we would ideally like to see all parking garages become,” says Nandwana.

While the mobility revolution suggests that the days of America’s vehicles sitting parked 95 percent of the time will soon be over, the Center Street garage hints at the potential for centrally located parkades to evolve into multifunctional hubs in a diversified transportation system—just as Peckham Levels, 9th Avenue, and Parcel K suggest ingenious possibilities for the evolution of the building type in completely new directions.