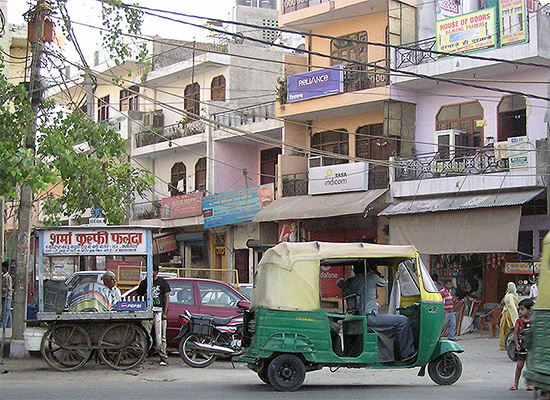 Arrowstreet sent me to India earlier this year to rekindle ties with a colleague. Saurabh Bagley & Associates (SMBA) is a firm in New Delhi doing a significant volume of work. Mr. Bagley had worked at Arrowstreet during his time as a graduate student at MIT. After his return to India, Arrowstreet teamed up with SMBA on a few commercial projects, but we hadn’t had a chance to work together in a few years. So, I went to meet with Saurabh and see his firm’s work, prospective clients and a country about which I knew little. The impressions I was left with were, in general:

I spent time in two places: the national capital city New Delhi in central India and Srinagar, the capital of northern province Kashmir. The two places are about as far apart geographically as Boston and Washington, DC, but they are far more distant in all other ways. In describing India, my host in Srinagar asked if I had a rupee note in my pocket. I pulled one out and he asked me to inspect the scripts on the back. “How many different ones do you count?” There were fifteen arranged in a column on the left under the numeric symbol. “In the West, you have one script basically, the Latin alphabet. Here, we have all these. That’s the difference between us.” Well, that’s one anyway… there were more.

Downtown Delhi in May is a cross between Washington, DC and Phoenix, AZ. With temperatures above 100 degrees and periodic sandstorms, it was hard to visualize the more tropical environment that would define later months when the monsoons arrived. As we approached the Secretariat, one of the major government buildings, I couldn’t help but be surprised by trees full of monkeys casually hanging out.

I was similarly surprised, when moving along one of the busy roadways between the international airport and the suburbs, to see sacred cows wander through a herd of school buses. Even road signs along the busy commercial street of Delhi integrated exotic animals in ways unfamiliar to me, including a “No Elephants” sign just to the right of the police booth. Many different kinds of animals and plants are revered and their images are integrated as icons in multiple ways in the culture, including the architecture.

Check back next week for thoughts on transportation in India, and the week after for my travel in Srinagar.