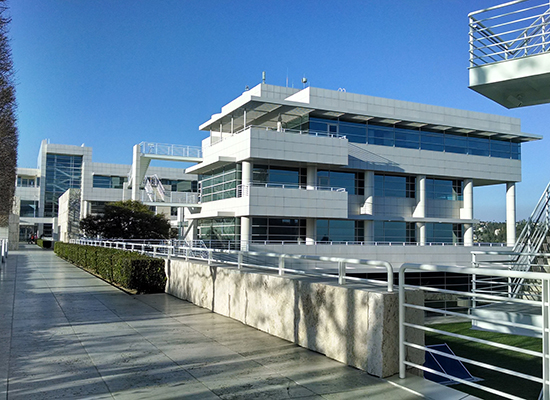 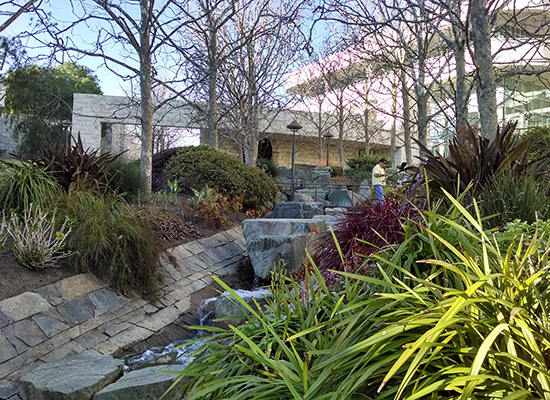 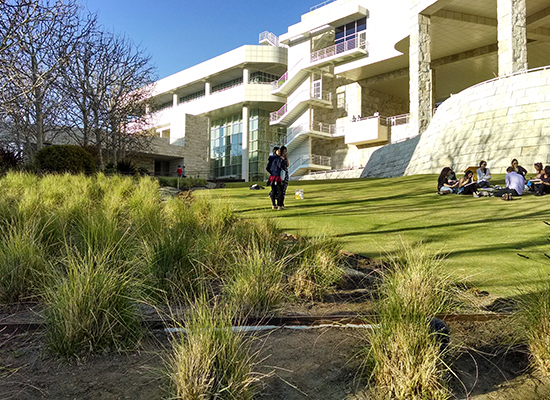 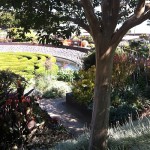 Pat Cornelison and I went to Los Angeles to attend ULI’s Healthy Places conference, a very interesting conference on an important topic. I will post about that experience in a separate blog post, but first, I’d like to comment on something else.

Turns out, I traveled to Los Angeles to go to museums, which surprised me… an east-coaster. I went to the Los Angeles County Museum of Art (LACMA) to see the James Turrell retrospective and visited the Getty Center, a much anticipated stop on my itinerary. Particularly, I wanted to view Robert Irwin’s garden at the Getty — not only because I enjoy his art, but was curious to see if the story of Irwin and the Getty’s architect, Richard Meier, not seeing eye-to-eye on the garden’s relationship to the buildings, was in fact true.

The Getty Center is quite a beautiful piece of architecture— it is as though the carefully composed buildings sit on top of a medieval hill town overlooking Los Angeles. The materials are beautiful, the views are strategic, and the galleries are wonderfully laid out and illuminated.

On the other hand, the garden commissioned by the Getty organization, which was created somewhat against the wishes of Meier, is extraordinary. Landscape architect Irwin, who has made a career exploring issues of perception in art, has done a number of things with the garden that are not only outside the normal bounds of landscape architecture, but also go a long way toward subverting the normal relationship between a building (or campus) and the grounds they sit in.

If you are familiar with Irwin’s work and writings, you know that he posits that one of the central issues to modern art is, as he calls it, the “subversion of the traditional relationship between figure and ground that held true in much of art since at least the Greeks.”

Landscape is, literally, the ground upon which the figure of the building is set, and is traditionally viewed as enhancing and extending the experience of a building. Irwin’s garden is an entirely different thing. While it doesn’t exactly ignore the building, it is certainly not the ground upon which to view the building— it is encompassed by the building. When moving through the garden, the traditional relationship reverses, and the building becomes the ground, while the garden becomes the figure. If you watch the people moving through the garden, the building might as well not even be there. It’s a lot like being in one the galleries looking at a piece of art (which, of course, is what Irwin sees the garden as). No wonder Meier is said to not like the relationship between the garden and his building.

It is also clear that Irwin’s intentions for the visitor’s experience are remarkably different than Meier’s. Meier’s architecture is highly compositional and honestly looks as good (maybe better) when people are not in it. Irwin’s garden is not about appearance, but the manipulation of each visitor’s experience and perception. The path to the garden leads one in and out of the plantings on an oblique angle, so the views are always in flux. He carefully modulates the experience for not only your eyes, but for your ears and nose. Diverse parts of the garden smell different and it is clearly intentional. As you pass by the stream dividing the garden path, stones are placed so water flows and sounds different as you walk.

When you finally enter the garden itself, you hear a waterfall.  Then, within a few steps, the sound entirely disappears. Even though you are on top of a hill overlooking LA, Irwin has cut the garden into the earth – with just the sky, light, plants, and water serving as the only visual focus. This is contrary to the beautifully framed views of the city Meier creates throughout his buildings.

For me, the Getty Museum is not only an extraordinary piece of art in itself, but is also something to think about for architecture. How do we make a place that is not just about how it appears, but also works with sound and scent…and impacts the rest of our senses? How does one use design to create a journey rather than just a place? And maybe most interestingly for me, how do we use design to heighten an individual experience and enhance perceptions of surroundings?