It Starts With Light 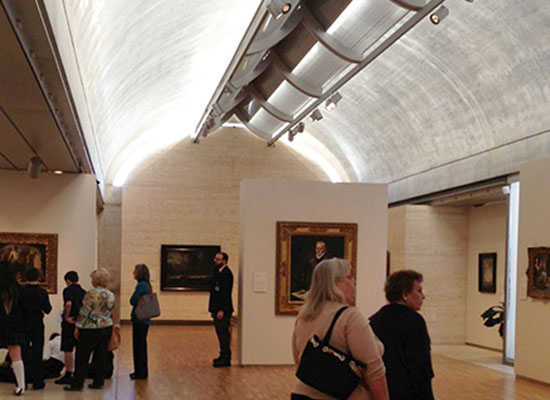 Recently, I had the chance to visit the Kimball Art Museum in Fort Worth, Texas. The little art museum by Louis Kahn is one of those master works we study in architecture school, learning by re-drawing its plan, section, and details. It seems simple. Six rows of barrel vaults with some space left out in the middle for a small exterior garden. Concrete, travertine marble, and some drywall. But what Kahn did with those few things!

They aren’t barrel vaults; they’re half-arches joined at their bases, like two wings. Each “wing” reaches up but does not quite touch the adjacent set of half-arches. Instead, a long space is left out between each pair of wings, allowing for a light slot along the peak of what would be the barrel. Then an upside down pair of smaller wings blocks direct sunlight and redirects it smoothly down the underside of the barrel. If you think concrete is a cold material suitable only for foundations and sidewalks, then you should see it bathed in Texas sunlight. It’s warm and calming in the Kimball. Below the barrels, travertine walls are laid out for the art. The texture of the travertine balances the smoothness of the concrete and gives the art a rich, but neutral background.

There is an assortment of types of spaces under these barrel vaults. Sometimes the light slot is left out, like in the theater where the floor steps down underneath the barrel. Natural light isn’t necessary here, but the same upside-down wings provide anchor points for the down lights. Sometimes a barrel vault with no light slot or upside-down wings covers an exterior space to offer protection from the heat, while framing the flat Texas landscape.

Every time I visit buildings designed by Louis Kahn, I am amazed by how uncomplicated they are. That’s not to say they aren’t powerful. It’s the opposite. Simplicity is their power. They’re quiet, calm, and subtle, and they reveal more and more the longer you study them.