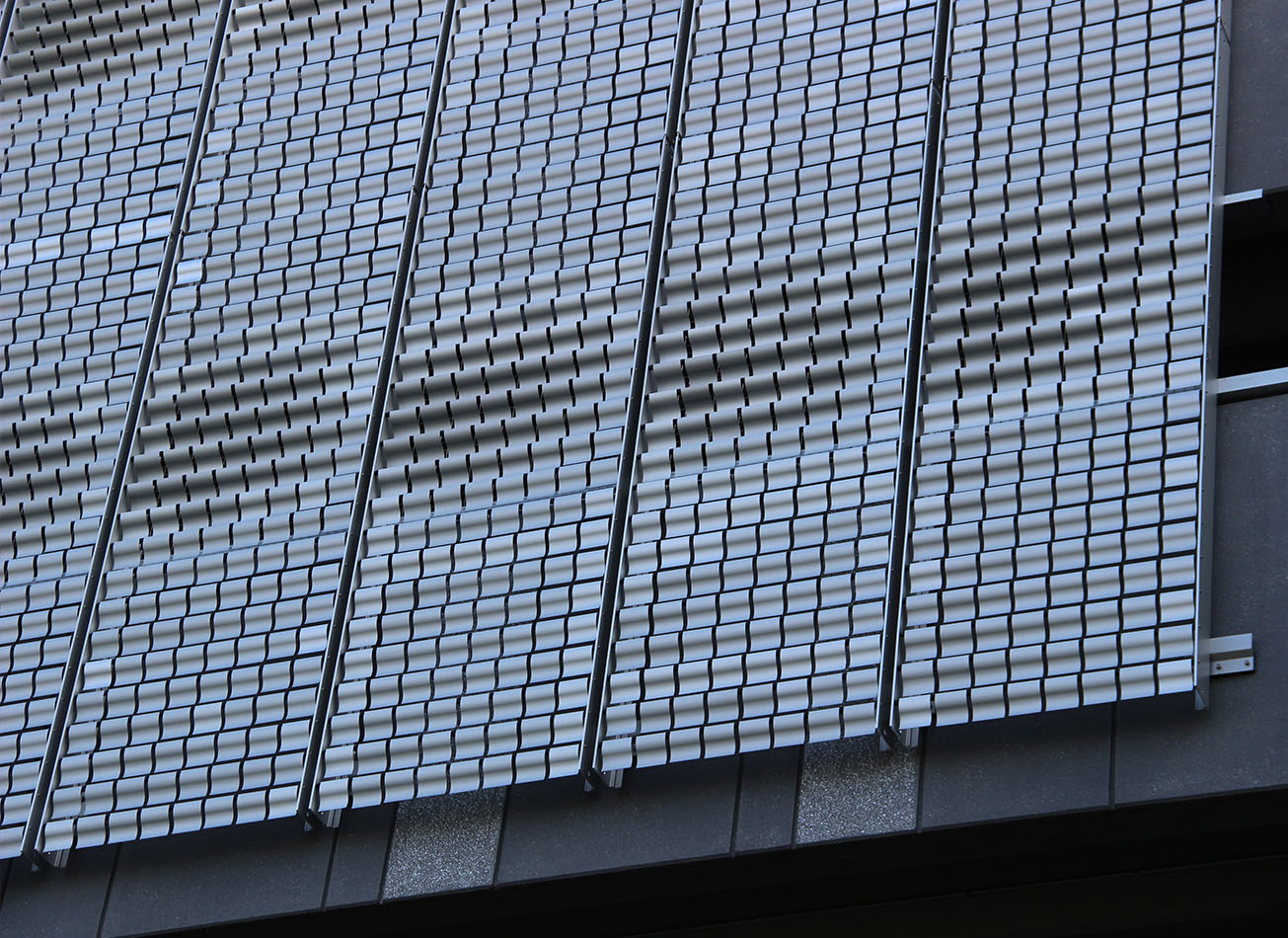 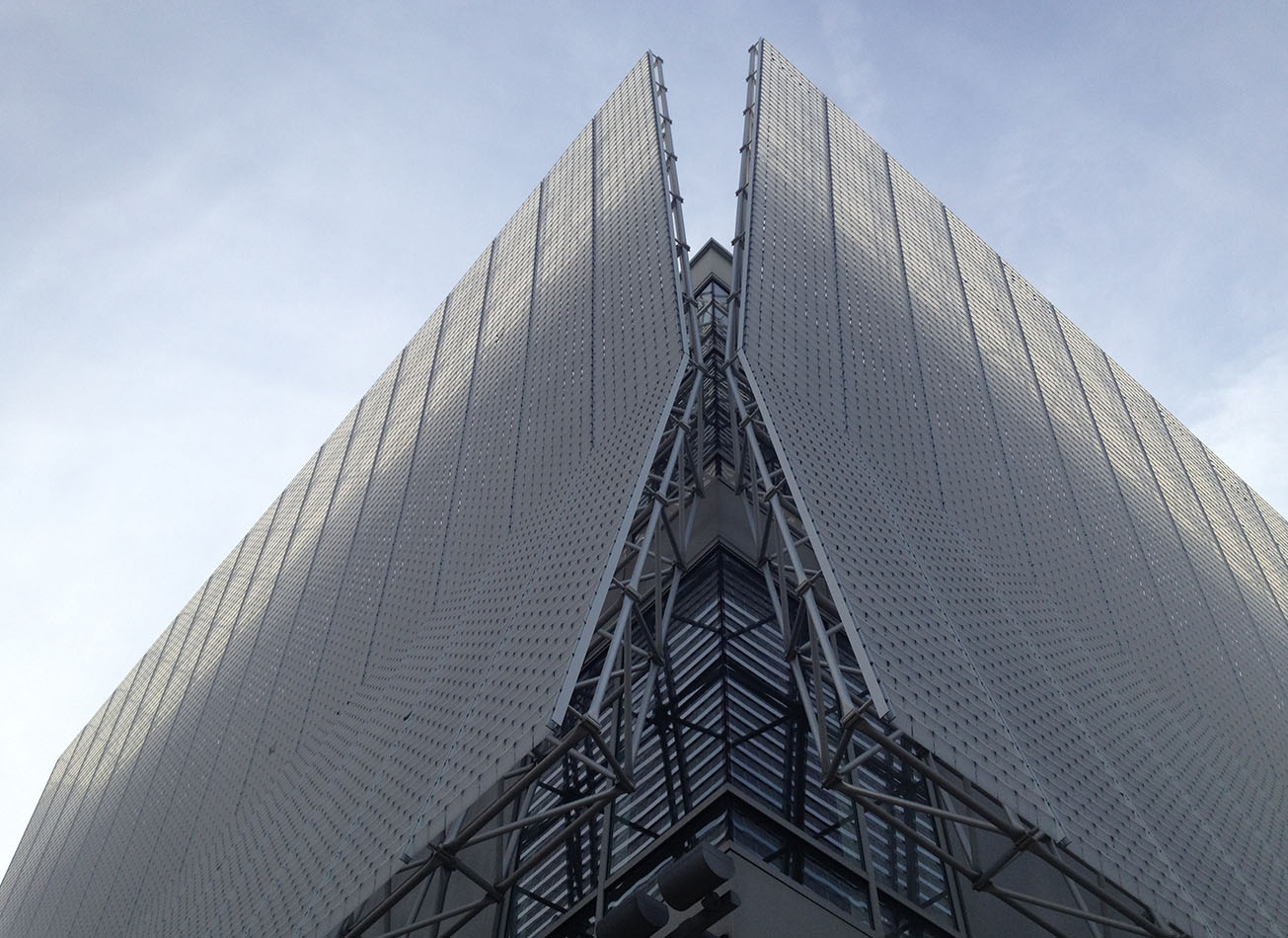 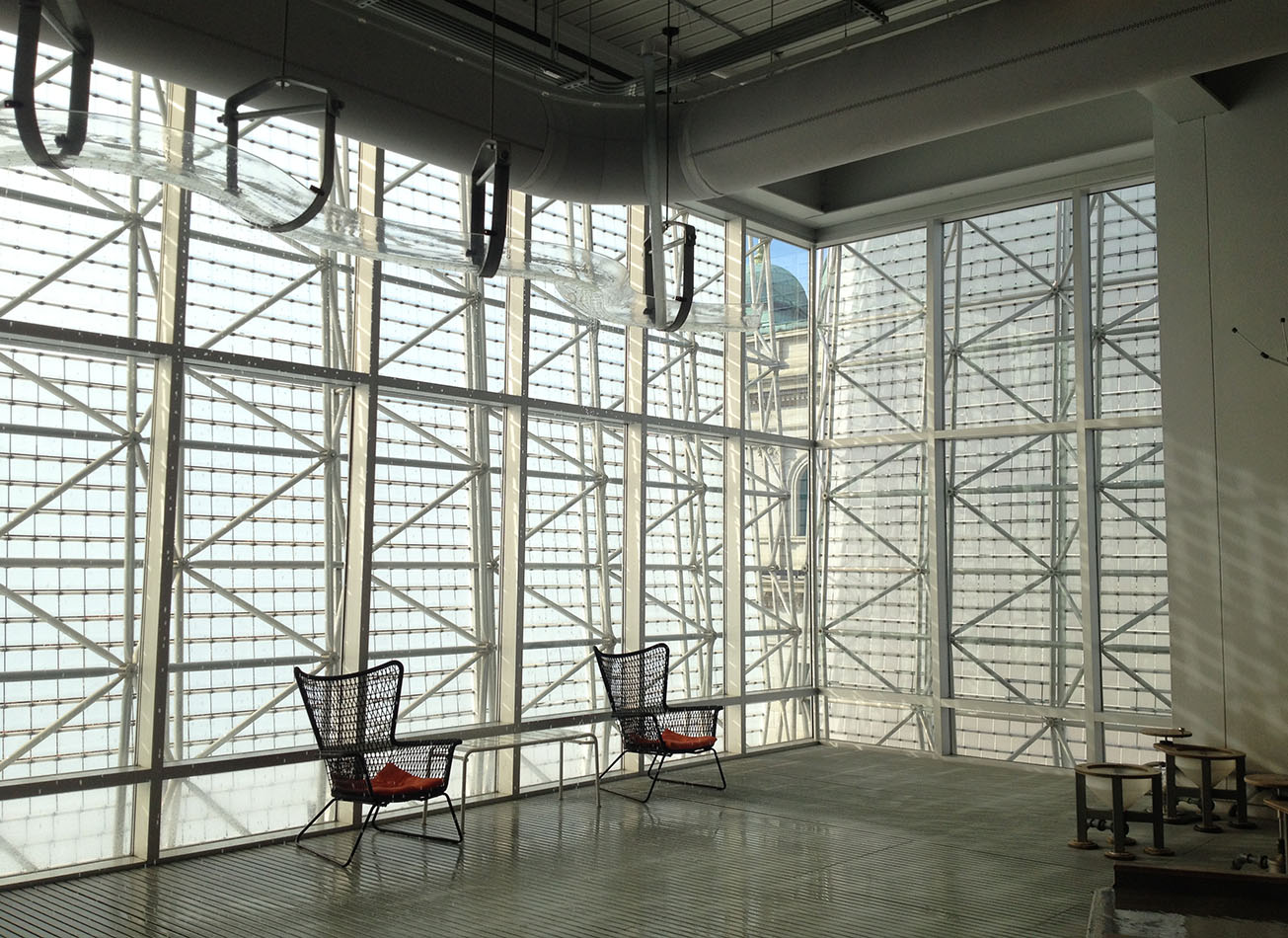 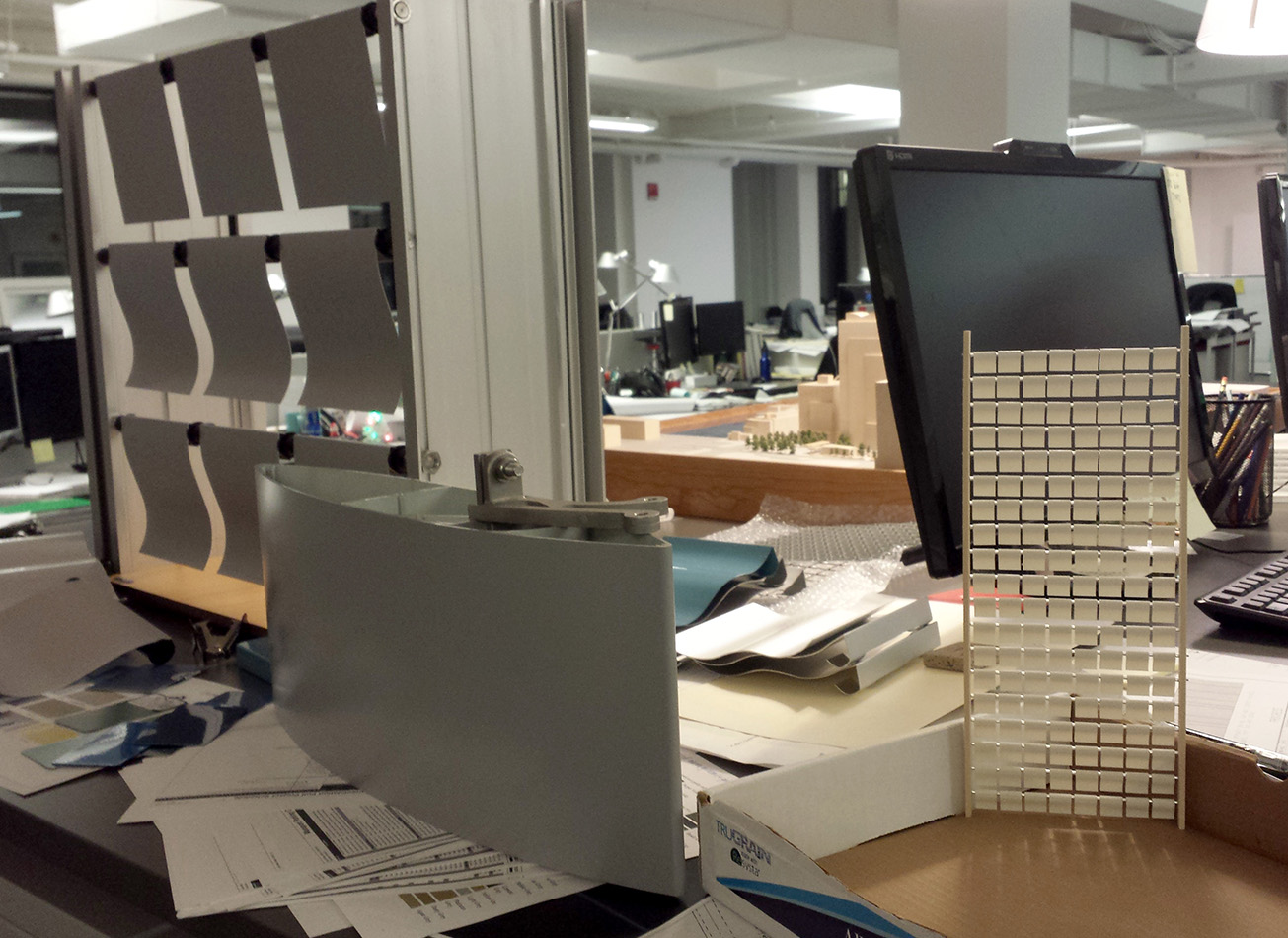 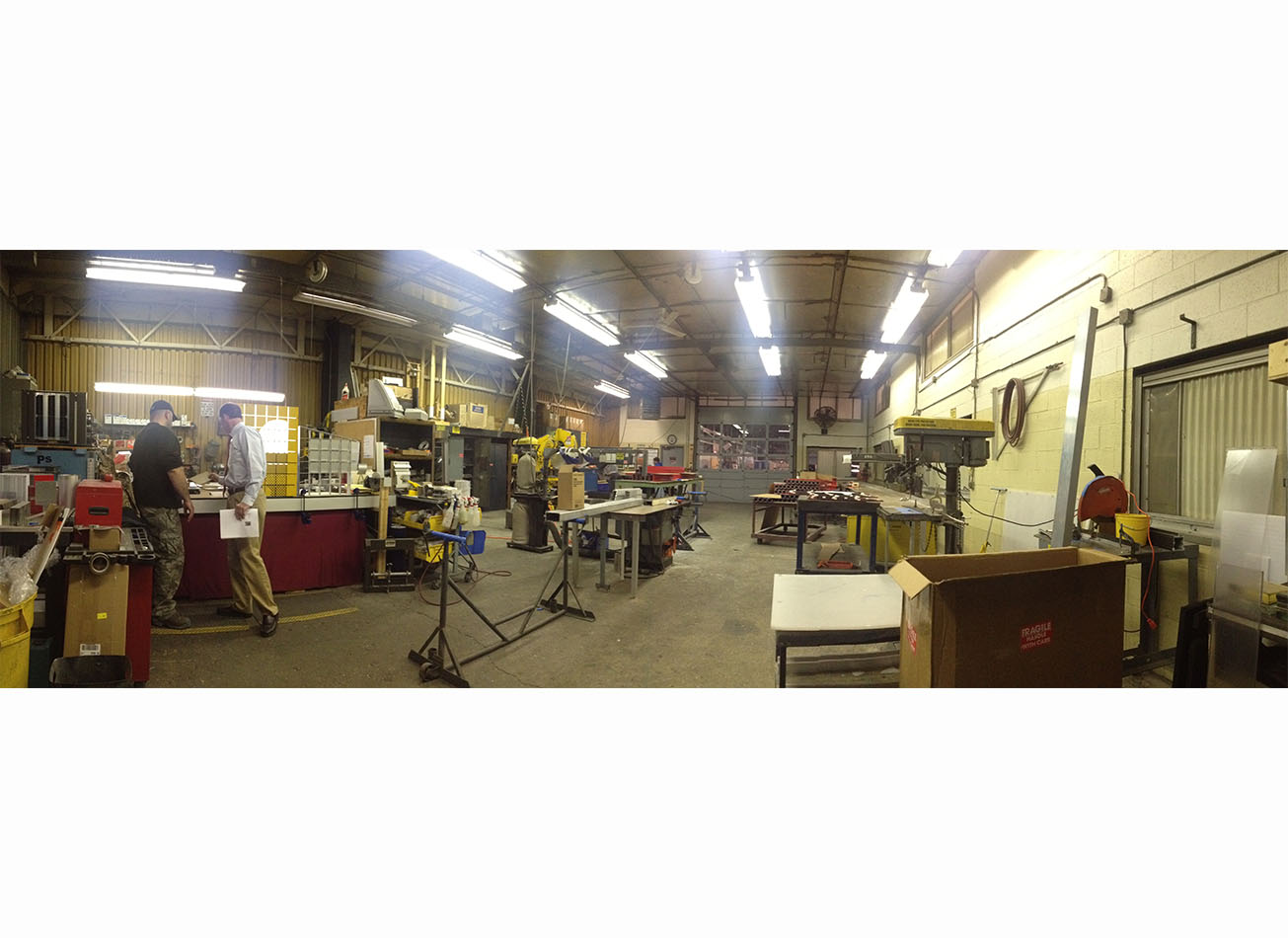 This is part II in a series on the design of the Logan Airport Central Parking Expansion. Please find part I here.

Once the design team and Massport came to a consensus on the idea of the artful screen on the expansion of the Central Garage, it was time for the team to start thinking about how to make it a reality. In our research for the kinetic facade, we found a similar project completed between Ned Kahn and a multi-faceted fabrication company in Pittsburgh, Extech Inc.

Early in the project, Amy Korte and I traveled to Extech’s offices to see the installation of a similar wall near a museum in Pittsburgh. Meeting with the chief designer and the owner of the company, it became clear early in the process that collaboration between our teams would facilitate the design and fabrication processes.

The ability to quickly customize the system for the Logan garage and establish the key parameters for fabrication were both important factors in designing the facade. From our research with Extech, we were confident that the system would function properly upon installation, could be completed within the project’s challenging fast-track schedule, and could be delivered within a reasonable and predictable budget.

Since each installation is unique, the design effort was multi-faceted and included testing and experimentation of alternative system components. Early in the process, we 3D printed a scaled mockup which was reviewed with Massport (and currently resides in their offices). Extech fabricated multiple flapper options to meet our design goals of creating a façade that looked attractive when static, while maintaining the ability to flow and function according to our vision in light to heavy winds.

Various shapes, material thickness, and finishes were tested, resulting in the curved anodized aluminum pieces that reflect light and ripple with the breeze. Finally, once key decisions on scale and material were made, Extech produced two full scale mock ups: the first as a test for design buy in with Massport, the second was a full scale mockup that temporarily went on the building for review, that mockup was subjected to 130 mph winds to test system resiliency. Ultimately the interactive process was extremely helpful in making design and detailing decisions, as well as defining budget and creating cost certainty.